Northern Central Hospital is a medical institution which has the privilege of providing quality patient care.

A Young Heart Blooms. « Go back 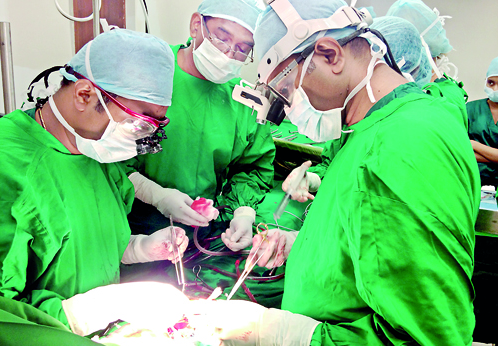 Thanks to a pioneering project carried out by a Sri Lankan doctor from Oxford, teenager Archana, a hole in the heart patient, smiles again... The Northern Central Hospital was established with the aim of providing private healthcare to the people in Jaffna. Though, Founder Chairman, S P Samy was not a medical practitioner by profession, due to the numerous requests from the people of the area, the land he had purchased for his four children was utilised to build a hospital...

NCH, which functioned as a nursing home during conflict-ridden times, has now transmogrified into a 60-bed, Rs. 600 million hospital, under Chairman Samy and Director Dr. S. Keshavarajah, committed to meeting the health-care needs, over a broad spectrum of specialties, of the people.

And so it was that last Sunday, Dr. Perumalpillai’s quest saw fruition, with the first needy patient going under the scalpel. “We closed a large 2.4cm x 2.8cm hole in the heart of Archana,” he explains.

Pointing out that though more and more such atrial septal defects (ASDs) can now be closed with a device sans an operation, he said that after close consultations with cardiologists it was decided that surgical closure was the better option in this case.
This decision was taken as a team, after Consultant Cardiologists Dr. Poopalan Lakshman and Dr. Mahesan Guruparan and Consultant Paediatric Cardiologist Dr. I.R. Ragunathan performed a transesophageal echocardiogram where Dr. Perumalpillai was also present, the Sunday Times learns.
“The three-hour surgery involved placing Archana on cardiopulmonary bypass or the heart-lung machine. Following the closure of the ASD, she was easily weaned off the machine and has made an uneventful recovery. She is expected to be discharged this weekend,” said Dr. Perumalpillai.

Archana’s is also not just a one-off open-heart surgery. When the Sunday Times visited the NCH on Wednesday, preparations were underway for two more surgeries within the week – one on Thursday (July 10) and the other over this weekend.